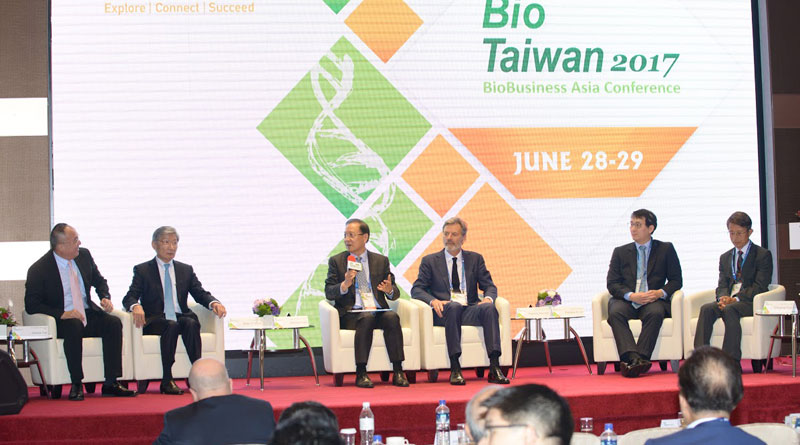 Flochel’s presentation included a selection of findings from ‘Beyond Borders’, Ernst & Young’s highly-regarded annual report on the state of the industry, and now in its 31st edition. Of note was the rise of Asia, particularly China, in investment into smaller, newer biotech companies, or ‘innovation capital.’

“China is now in fourth place for financing innovation capital. First place is held by New England, second is San Francisco, then San Diego. China is now ahead of the UK or anywhere in Europe,” he mentioned, adding that in 2016 biotech IPO values in Asia totaled higher than in the US.

“And what’s interesting are the levels of home-grown investment, and participation by local strategic investors, which is a good reason for optimism in the future growth of the sector.” And as an indicator of region’s vigor, Flochel pointed out that in China alone in 2016, 37 biotech and pharma M&A deals were struck, with a total worth of US$6.8 billion.

Coming off the release of ‘Beyond Borders’ at the annual Bioindustry Innovation Organization (BIO) Conference, held this year at San Diego, Flochel noted that while 2015 was a bumper year for the industry with 2016 being down on these figures slightly, 2017 is shaping up to be another great year.

“The mood at BIO was celebratory, mainly because the FDA has already approved as many drugs in the first half of this year as the whole of 2016. And by the way, BIO hosted over 43,000 one-on-one meetings, which will lead to business growth, for sure,” he added.

Tsay Yuh-geng, in his presentation on building a medical devices business, drew from his time at Thermo Fisher Scientific, from its forming in 2006 with the merger of Thermo Electron and Fisher Scientific and as it acquired companies at a rapid rate in subsequent years. Some advice for budding med device startups included creating not just the hardware but also a total solution, and all the better to be in niche markets. And making sure your business model included a disposables component, such as the use of testing strips in a diagnostics device, for recurrent revenue.

“And try to get profitability as soon as you can. Don’t just keep investing in a new idea, and then another new idea. You’ll have a bunch of new ideas in your start up, but no revenue. In medical devices M&A, most will only buy companies that are already profitable,” advised Tsay.

Touching on one of the themes of the conference, precision medicine, Lee noted that its emergence was turning the traditional drug industry on its head.

“It’s turning the concept of a ‘drug’ into more like ‘managed care’. No longer just treatment, but also diagnostics and prevention. As a result, many pharma companies are having to move into whole new areas, not just medicine but total solutions,” said Lee.

Flocher noted the payer aspect to the precision medicine paradigm.

“For the people that pay for medicines, the fact that you can now have a drug that is not wasted on patients that it won’t have any effect on, is very important.”

With another important component of precision medicine being diagnostics, the technology landscape is advancing rapidly, noted Tsay.

Tanvex’s Chao added that in the pharmaceutical industry, “it is becoming more and more about drug delivery, either better targeted, more efficient or more convenient delivery, through a device or some other technology.”

Noting Taiwan’s role here, Amgen’s Cai mentioned that one of their biologics products combined a drug and delivery device, and that that device came from Taiwan.

“With this, it’s clear Taiwan is now part of the biologics value chain. I hope they will continue to participate in global value chain development, and demonstrate Taiwan’s leadership in the biologics space.”

MIT’s Lu pointed out that precision medicine has only just started.

“There was so much still to discover about which genes were responsible for which functions. I think we’ve only just scratched the surface, and there’s a lot of opportunity out there.”