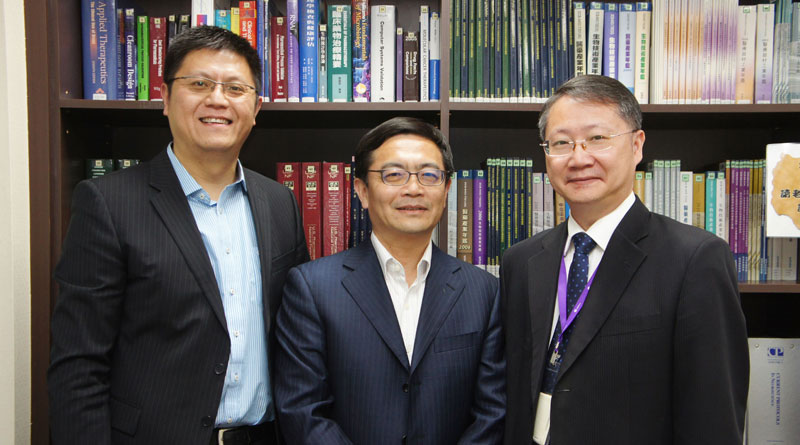 TAIPEI, Taiwan, April 19, 2017 /PRNewswire/ — GNT Biotech & Medicals Co., Ltd., (GNTbm) (TPEx: 7427) has announced that the anticancer drug Chidamide (HBI-8000), an epigenetic regulator developed by Chipscreen Biosciences Ltd., of Shenzhen, China, had received approval from the Taiwan Food and Drug Administration (TFDA) to begin a Phase III clinical trial in Taiwan for hormone receptor-positive, HER-2 negative late stage breast cancer. The trial is to establish a second indication for Chidamide after peripheral T-cell lymphoma (PTCL), a rare condition for which it received approval for use in China in 2014 and which is currently under clinical study in the US and Japan for the same. Chidamide is only the fourth Histone Deacetylase inhibitor (HDACi) approved in the world.

HUYA Bioscience International, LLC, of San Diego, USA, received the exclusive license from Chipscreen Biosciences to develop and commercialize Chidamide outside greater China in 2006, while GNTbm received the rights for the drug in Taiwan from Chipscreen Biosciences in 2013. Meanwhile, in 2016 HUYA Bioscience International granted Eisai Co., Ltd. of Tokyo, Japan, exclusive rights to develop and commercialize the drug for cancer indications in Japan, South Korea, Thailand, Malaysia, Indonesia, the Philippines, Vietnam and Singapore.

While the drug is thus far only approved for PTCL in China, GNTbm is preparing an NDA for submission to the TFDA for this indication in Taiwan and expects approval sometime in 2019. The drug is also currently in Phase II trials for PTCL in Japan.

TFDA’s approval to allow GNTbm to run a Phase III clinical trial of Chidamide for hormone receptor-positive, HER-2 negative late stage breast cancer is based on the following circumstances: As Chipscreen Biosciences is already running a Phase III trial in China for late stage breast cancer and the open stage study of the trial has shown good results on preliminary efficacy, and because the clinical trial will administer Chidamide in combination with the well-established cancer drug Aromasin®, an aromatase inhibitor, there are fewer safety issues to consider. Additionally, GNTbm will be using the same clinical trial protocol as used by Chipscreen Biosciences for the upcoming Phase III trial in Taiwan.

According to Dr. Chia-Nan (Alex) Chen, President of GNTbm, approval to conduct the Phase III trial was granted by the TFDA on April 7, 2017.

“We expect this combination will provide a solution for the second-line treatment of these late-stage/recurrent breast cancer patients facing the problems of drug resistance, recurrence and adverse effects,” said Chen.

The Phase III trial will begin to recruit patients in three months and be completed sometime in 2019, with Chidamide expected to gain its approval for its second indication in 2021, added Chen.

Currently, for patients with hormone receptor-positive, HER-2-negative advanced stage breast cancer, effective clinical treatments are limited, with new drugs and drugs with new mechanisms urgently needed. According to clinical and epidemiological studies, around 10,000 new cases of newly-diagnosed breast cancer are presented in Taiwan every year, and of these 65-70% are tested to be hormone receptor-positive and HER-2-negative. Such patients will usually be prescribed the first line adjuvant therapy or rescue therapy of endocrine drugs for patients with action mechanisms including inhibition of hormone synthesis and receptor binding blockade. After many years’ treatment, a high proportion of patients will develop resistance to such treatment, and many will encounter disease recurrence. For such patients, second line therapy is mainly endocrine drug treatment. GNTbm hopes that Chidamide combined with the aromatase inhibitor Aromasin® will be a more effective second line treatment, with the epigenetic regulation mechanism of Chidamide being able to reduce drug resistance and incidences of disease recurrence, and thus prolong survival rates in hormone receptor-positive HER-2 negative late stage breast cancer patients.

According to research data, late stage (Stage Four) breast cancer patients have a five-year survival rate of only around 24%, showing the urgent need for new drugs and drugs with new mechanisms of action. GNTbm hopes to address this issue by accelerating the development of the first and second indications of Chidamide, in addition by domestic PIC/S GMP-compliant manufacturing of Chidamide, to achieve the goal of benefiting patients in Taiwan.

About GNT Biotech & Medicals (GNTbm)
Formed in 2013, GNTbm is currently focused on the development of the Vaucarrin™ drug delivery platform to create new drug complexes for applications in cancer, rheumatoid arthritis and neurodegenerative diseases. Drugs including small or large molecule, protein drugs, siRNA and DNA, etc., all can be incorporated into this platform. GNTbm also provides collaboration opportunities for developing drugs with different targets and new formulations. In addition, GNTbm is conducting the NDA and new indication development of Chidamide in Taiwan. Chidamide, the novel epigenetic regulator for targeted cancer therapy, is a small molecule in-licensed from Chipscreen Biosciences Ltd. of Shenzhen, China. Chidamide is only the fourth Histone Deacetylase inhibitor (HDACi) approved in the world. GNTbm has in-licensed seven patents, including one for Chidamide, and others from the parent company Gold NanoTech Inc. for nanogold applications. GNTbm has submitted provisional filing and expects to submit a further six patent applications for the medical use of nanogold drug delivery technology one year from now.

About Gold NanoTech Inc. (GNT Inc.)
Gold NanoTech Inc. (TPEx: 1267) was established in 1993 by a team of electronic and materials experts focused on the R&D and manufacture of trace precious metals, including gold, silver, platinum and palladium. GNT developed a unique Physical Vapor Deposition (PVD) production process, a physical metal nano-manufacturing technology that is radically different from ordinary chemical nano-metal processing. GNT’s physical processing produces nano-scale materials without the addition of other elements or dispersants. Resultant materials are collected and distributed using pharmaceutical grade water and with the purest nanomaterial processing technology available. PVD technology produces gold with a purity of 99.99 percent. This material has passed toxicology tests making it safe for human consumption. Gold flakes produced by the PVD process and used in cosmetic, food and beverage applications have been approved as a food additive by the Taiwan FDA, the European Regulation of Food Additives (E175), and FDA.

To view the original version on PR Newswire, visit: http://www.prnewswire.com/news-releases/gntbm-to-begin-phase-iii-clinical-trial-in-taiwan-of-epigenetic-regulator-chidamide-for-late-stage-breast-cancer-300441789.html